This dish was so fun to make and turned out so beautifully, I can’t stop smiling about it. This would be great to serve fora dinner party! Don’t forget the bread!

I seriously cannot believe I made this dish! To me, there is something so beautiful about simple food. Basically this dish is clams in a white sauce with tomatoes over pasta. It doesn’t get more basic. I adore the way seafood looks, especially clams and mussels, and this dish is a wizz-bang-show-stopper! I mean, just look at the colors! I loved every part of making this meal and I certainly plan on doing it again!

We started at the fish market. I am a clam virgin so I relied on the fish monger to explain them to me. Turns out, clams are not cheap, so he suggested we buy just the meat to get more bang for our money. I wanted the real deal, so we bought both. I can’t imagine making this dish without the clams in their shells; it’s half the fun!

As soon as we got home, I put them in a bowl of cold water, sprinkled in some semolina, and let them sit in the refrigerator until dinner. Supposedly, the semolina makes the clams open up and spit out any sand they might be holding onto. (Black pepper works as well.)

Step one of this dish was to prepare my ingredients. I sliced half of my tomatoes and left the other half whole; chopped my parsley; then I smashed my garlic and prepared my pasta and set it aside. (They say to wait until the last minute to chop the parsley so it is as fresh as possible. I’ll do that next time. I was nervous about making this dish so I wanted everything prepared ahead.) 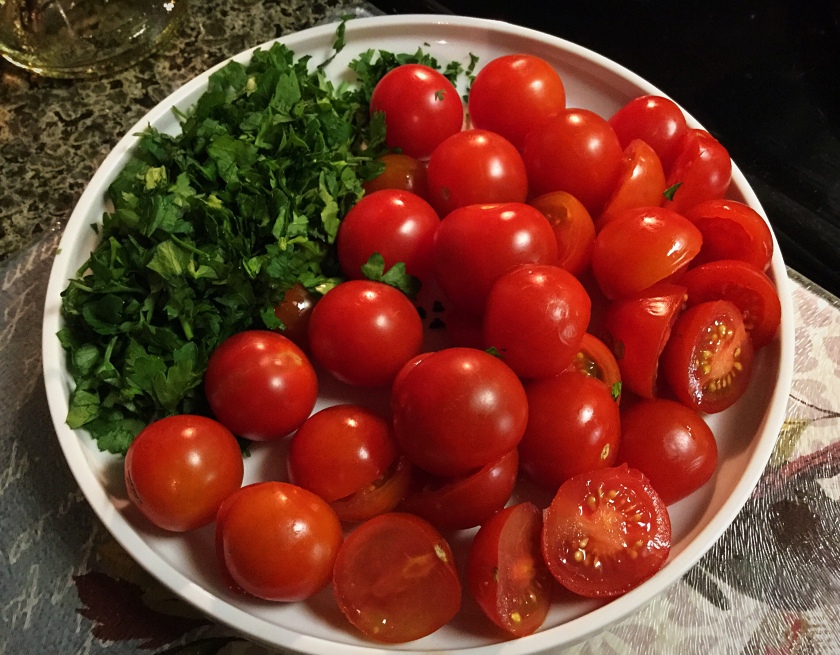 When I was ready, I heated my olive oil to medium, and then added in the garlic and red pepper flakes. This cooked until fragrant (oh and it was a beautiful aroma!) about two minutes.

Then came the tomatoes. (Isn’t this pretty? I loved the colors!) The point here is to blister them in the oil. It takes about five minutes.

Here is a silly video of the tomatoes blistering:

Next comes the wine! I used a Sauvignon Blanc. They say to only cook with a wine you would drink so I followed the rules to the letter. This was left to come up to a boil. (Took about a minute.)

The clams go in next! Then the pot gets covered for two minutes in order to steam them. (I swear to you, I’m feeling giddy typing this out. I had some much fun doing this!)

I was a little bit uncertain about when to add the extra clam meat, so I opted to wait until I could see the clams starting to open. I was really afraid of over-cooking them. No one wants to bite into a rubber clam!

Here they have started to open up, so this is the point where I dropped in the other clam meat. 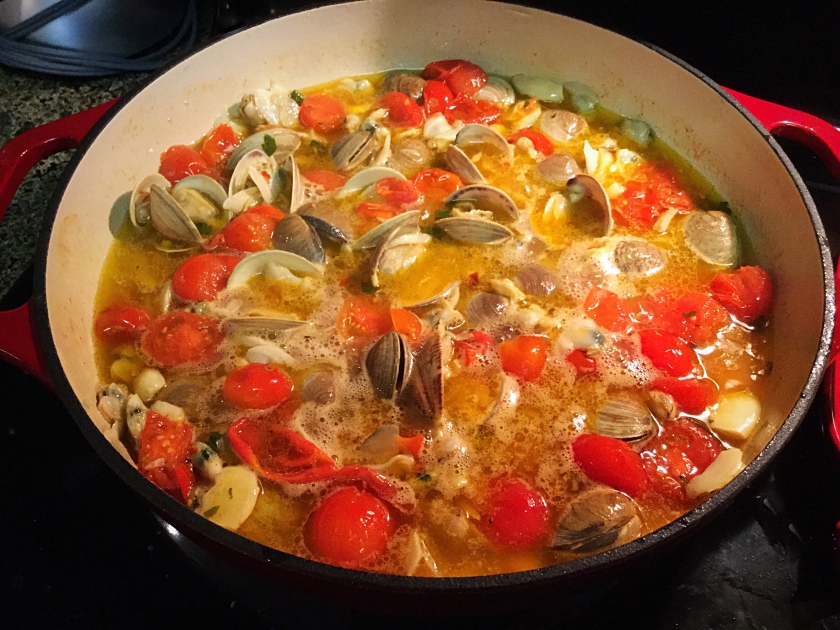 This is another silly video that captures my giddiness!

Finally, it’s time to add in the pasta. We used angel hair pasta, which is our favorite. The recipe calls for spaghetti or linguine, but I ignored that part. The important part was not to cook the pasta all the way through because it continues to cook in the sauce. Thankfully, I managed to get it right.

Lastly, the fresh parsley goes in, the heat goes off and then the cheese goes on.

Voila! How gorgeous is this!!!

Directions:
Bring a large pot of water to a boil. Add a generous amount of salt (salty like the sea!) and the pasta and stir to separate. Cook until a few minutes shy of al dente, then drain.

Add the pasta to the skillet along with the parsley, cheese and butter. Cook, tossing and stirring and drizzling with olive oil, until the pasta is cooked through and the sauce is silky and thickened. Serve drizzled with oil and sprinkled with cheese and parsley.

PUBLIC SERVICE ANNOUNCEMENT: If you don’t serve this with a loaf of crusty bread, you will seriously regret it!

How do I know this? We forgot and seriously regretted it! The sauce is divine and crusty bread would have been perfect for sopping it up!