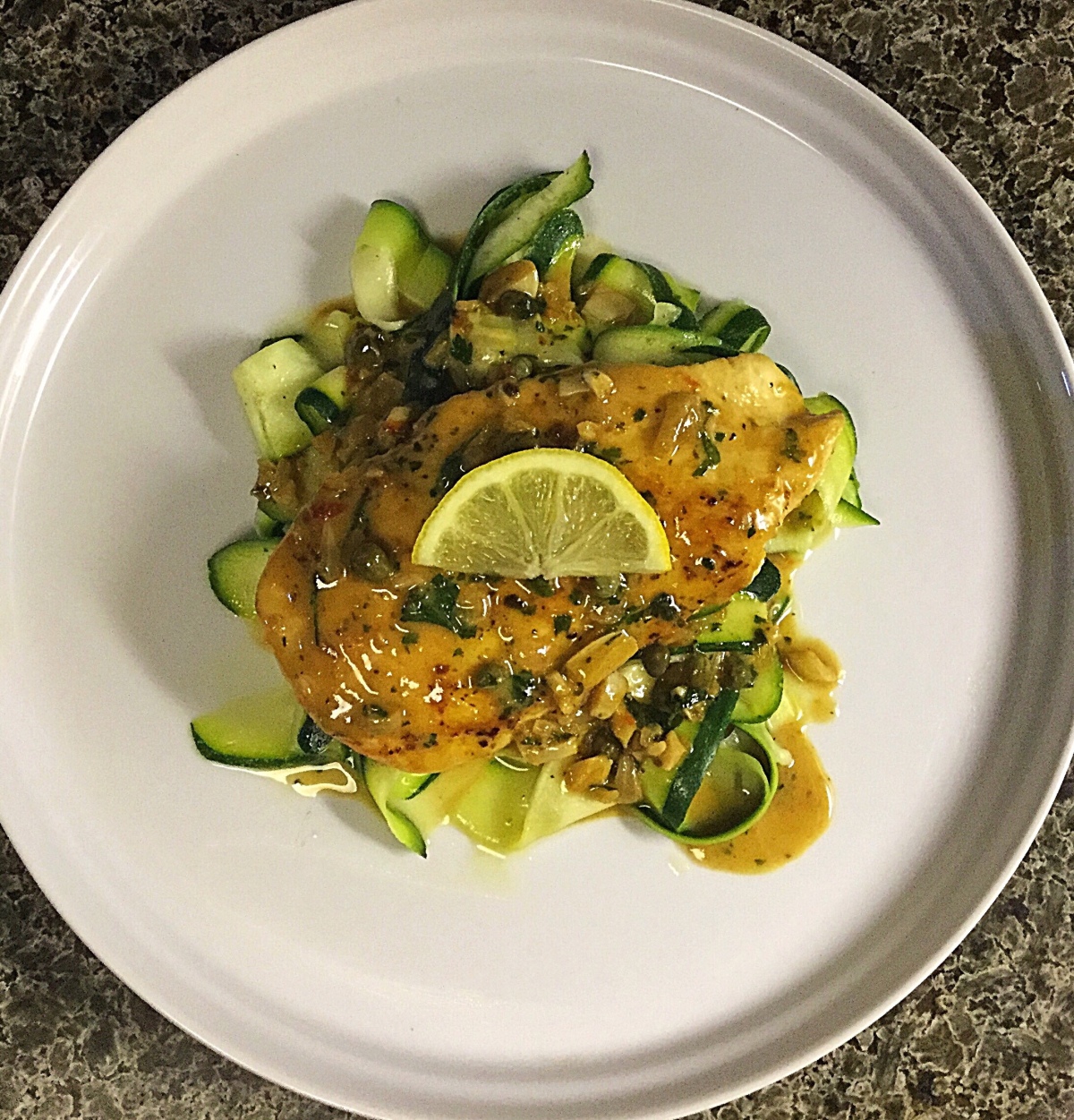 I say it all of the time but it bears repeating: most often the best recipes are born out of necessity. I knew I had too much zucchini sitting in the refrigerator; I knew I wanted to make something very low carbohydrate; and I knew I wanted to make chicken. Charlie and I both are citrus and garlic lovers, so this dish was almost a no-brainer, except for the sauce. We are both attempting to limit carbs, so I needed to improvise the sauce in order not to have to use flour for a roux.

First order of business was to assemble my ingredients.

If the photo below looks familiar, it’s because I’ve used it before. I didn’t photograph the zucchini last night (whoops). This is how we like to make our zoodles. To me, the texture is better than spiralizing. If you like spiralized zucchini, by all means do that. Prepare the zucchini and then set aside for cooking later.

I like a mixture of olive and avocado oil, so this is what I put in my pan. (I also add about a Tbsp. of butter if I’m being honest.) I prepared the chicken with my favorite new seasoning from Trader Joe’s. By all means go get this if you haven’t tried it! If you don’t have this on hand, just use salt and pepper (or whatever you really like using.)

The chicken only stays in the pan for about 3 minutes each side. You are not trying to cook it through in this step. You only want to brown it. When it’s a nice color on each side, remove it to another plate. Add a little bit of butter to the pan, then the diced shallots. Cook the shallots for a minute or two, then add the broth mixture. Bring this to a simmer and then go watch TV (or drink wine) for about 10-12 minutes while it reduces.

As you can see by the video (below), my sauce is a funny looking color. This is because I used organic bone broth. (It’s what I had on hand.) By all means use what you have on hand. If you prefer chicken broth or vegetable broth, that will work as well.

Once the sauce has reduced, the next step is fairly easy. Remove the pan from heat, whisk in 1 Tbsp of butter until it melts, then whisk in the cream until it’s incorporated. Put the pan back on the heat for about 2 minutes to allow it to heat through, then add the chicken back to it.  I have no idea why it didn’t occur to me to photograph this step, but oh well. After this, stir in the capers and then the whole pan goes into the oven for about 5 – 10 minutes to cook through.

While this is happening, saute the zucchini noodles. (This is what it looks like.) 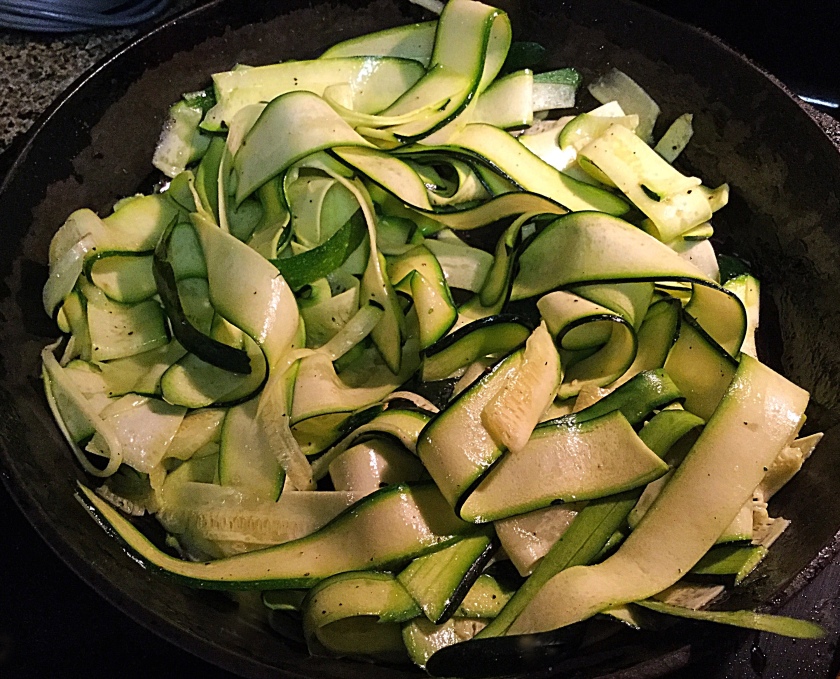 To the zoodles, I added another one of my current favorite spices: Cilantro lime seasoning blend. I also added the zest of two lemons.

Once the zoodles are the consistency of egg noodles, I take them off the heat. Then pull the chicken out of the oven, stir in the chopped herbs and plate it up. I garnished with fresh lemons. 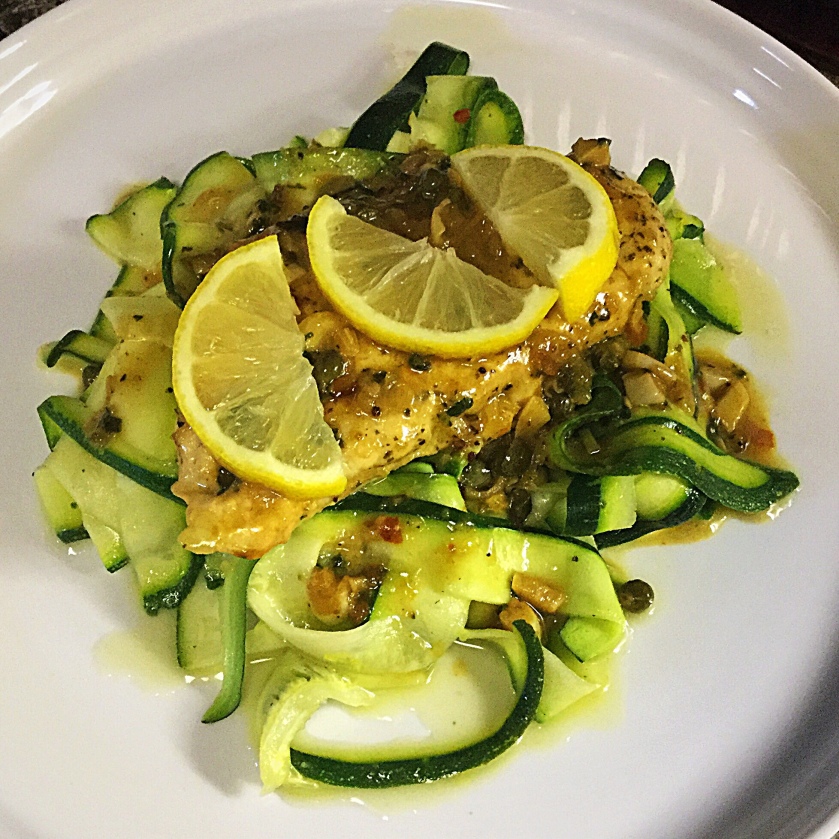 BTW: If you are not a fan of zoodles, this chicken dish stands on it’s own. You could serve it alongside some freshly steamed broccoli or asparagus would be lovely as well! Any type of pasta would work, too!

I guestimate the calorie count of just the chicken and sauce is around 305 per serving.

1-2 Tbsp. Seasonings to taste (see above for what I used.)

1. Create the zucchini noodles using a vegetable peeler (use a spiralizer if you like that texture better.) Set aside.

2. Zest the lemons and set the zest aside for later. Then slice the lemons and squeeze the juice into a strainer to catch the seeds & pulp. Into a larger measuring cup or bowl, add two cups of broth, 2 Tbsp. lemon juice, red pepper flakes and garlic. Stir and set aside.

3. Pound your chicken breasts to the same thickness. Mine were 1/2″ thick. Season with salt and pepper. (I also used a good amount Trader Joe’s: “21 Seasoning Salute”-use what you like)

4. Over medium high heat, sauté the chicken in olive oil, about 2 -3 minutes per side. No need to cook all the way through, as it will be going into the oven later. You are just looking for good color on both sides. Remove to a plate. Reduce heat to medium.

5. Put 1 Tbsp. Butter into the hot pan, swirl around, then add the shallots. Cook about 2 minutes, then add the broth mixture. Bring up to a simmer. Let it reduce to about a half cup. (Took about 12 minutes)

6. When the sauce has reduced, remove from the heat, whisk in 1 Tbsp. Butter, then whisk in the cream until it’s fully incorporated. Return to heat for about a minute or two to reheat. Stir in the capers if you are using them. (Do NOT allow the sauce to boil.) Add the chicken back to the pan; turning it in the sauce to coat both sides; then put it into the oven for 5-10 minutes.

7. In a separate skillet, over medium heat, add 1 Tbsp. Olive oil, 1/3 c. Broth, zoodles, lemon zest and seasonings. Toss in the oil and broth until fairly wilted. (I hate soggy zoodles, so watch this carefully. It only takes about 3 minutes.) Season with salt and pepper and 3/4th of the lemon zest.

9. Garnish with fresh lemon, more parsley and the last bit of lemon zest.

Beautiful, delicious food doesn’t have to take a million steps to prepare. Check out this one pan wonder…

Dinner doesn’t always have to have dramatic preparation to be both beautiful and delicious. Last night when I got home late, my husband already had the chicken marinating in a balsamic concoction. All I did was figure out what vegetables to throw on a pan and dinner was underway! 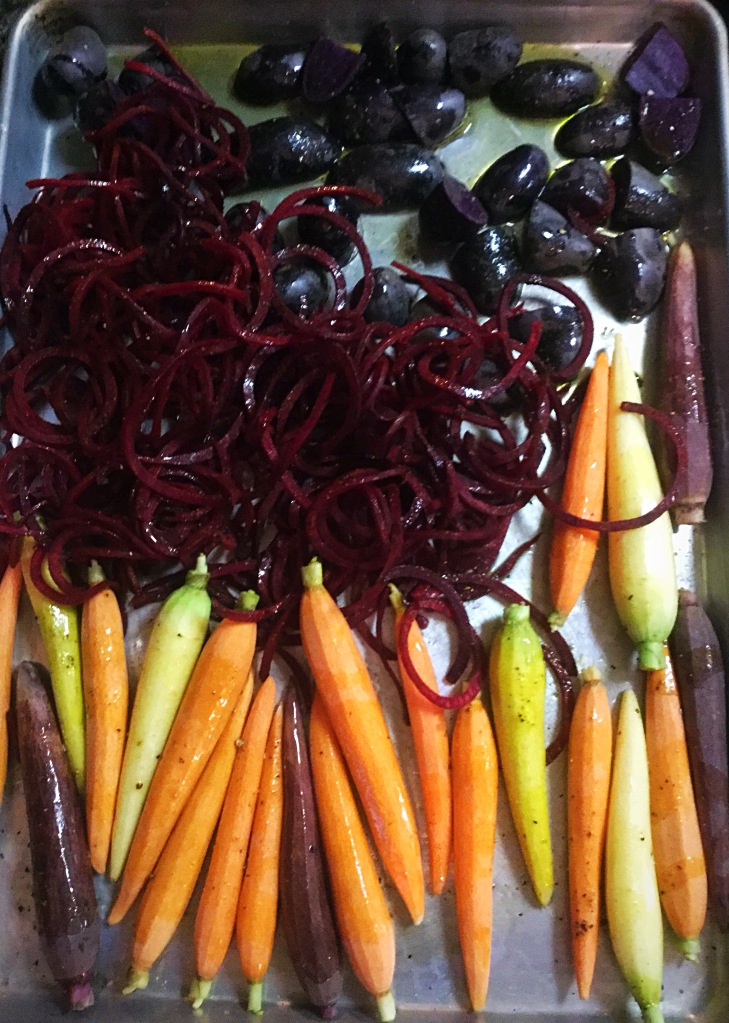 I opted for beautiful tri-colored baby carrots, purple potatoes and spiralized beets. (I am on a spiralizing kick lately!) I sprinkled on some olive oil and salt and pepper, then popped them into the oven at 400 degrees for 15 minutes. At 15 minutes, take them out and make a little room on the pan, then add your chicken and pop it all back in the oven for twenty minutes. Last night I got involved with writing for another site and I forgot this step which is why you see no chicken on this pan. No worries. I baked the chicken in the pan it was marinated in.

And here is the finished product. Aren’t they beautiful? Here, I usually sprinkle on a little more pepper and call it a day.

Here is my plated dinner. Okay, I lied. At the last minute we had a taste for some steamed broccoli so we made it. We could have just as easily roasted it on the same pan as the other veggies, but we didn’t decide on it until the other stuff was already in the oven. Beautiful and delicious and no one has to know how simple and easy it was to prepare.

Unless you write a blog about it to tell the world!

(Are you ready for this?)

How long you wish to leave the chicken marinating is entirely up to you. I like to let mine sit from 1-4 hours. Just cover it and put it in the fridge. Take it out and let it sit at room temp for at least 30 minutes prior to cooking. If you are in a rush, just let it sit half an hour, it will still be great.

For the one pan dinner:

Use your common sense here. If you are roasting soft veggies that will cook fast like zucchini, yellow squash, onions, tomatoes, etc. Put everything, including the chicken, on one pan and cook them together.

When you are roasting dense veggies like potatoes, beets, carrots, parsnips, acorn squash, etc, start them in the oven at least 15 minutes before adding the chicken.