Yes, I know there I have posted similar recipes. This is the best one of them all.

Most often, the best recipes come from trying to make use of vegetables before they go bad in my refrigerator. This weekend I realized I had three zucchini just sitting there, so one morning I decided they had to be used. What’s easier than zoodle pie, right? (I’m being sarcastic. I know some of you are going, “EXCUSE ME. She thinks everything is easy!” This really is. I promise.)

First thing in any recipe is to assemble the ingredients.  For this recipe, however,  time is needed for the zoodles to sweat out excess water, so the first thing I did was use my handheld vegetable spiralizer to turn the three zukes into long spirals. After this, I laid them out on paper towels and sprinkled a little bit of salt through them. I did the same thing with the tomatoes. 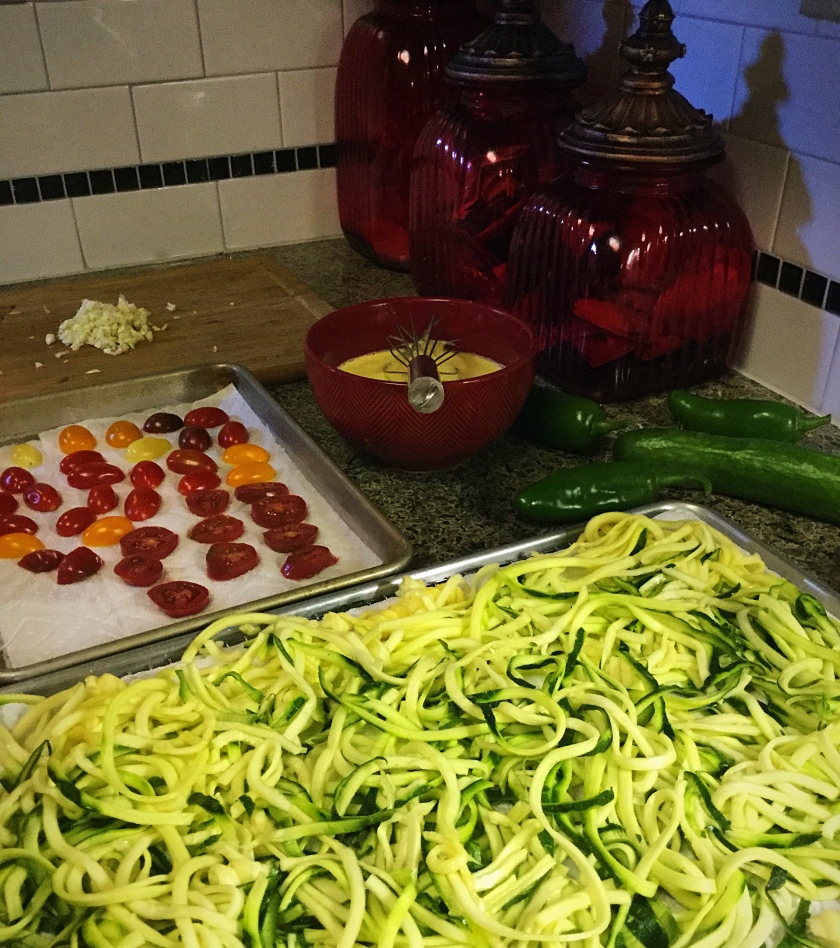 The longer you let them sit, the more moisture is released. I let these sit there the entire time I was caramelizing one large onion. I think it was about thirty five minutes. The red fleck you see is one eeensy beeensy red pepper I found in my garden. I just added it for a little color. As you can see I’ve got plenty of seasoning in the pan: Italian seasoning, salt & pepper, dried basil, and Trader Joe’s “21 Season Salute”. 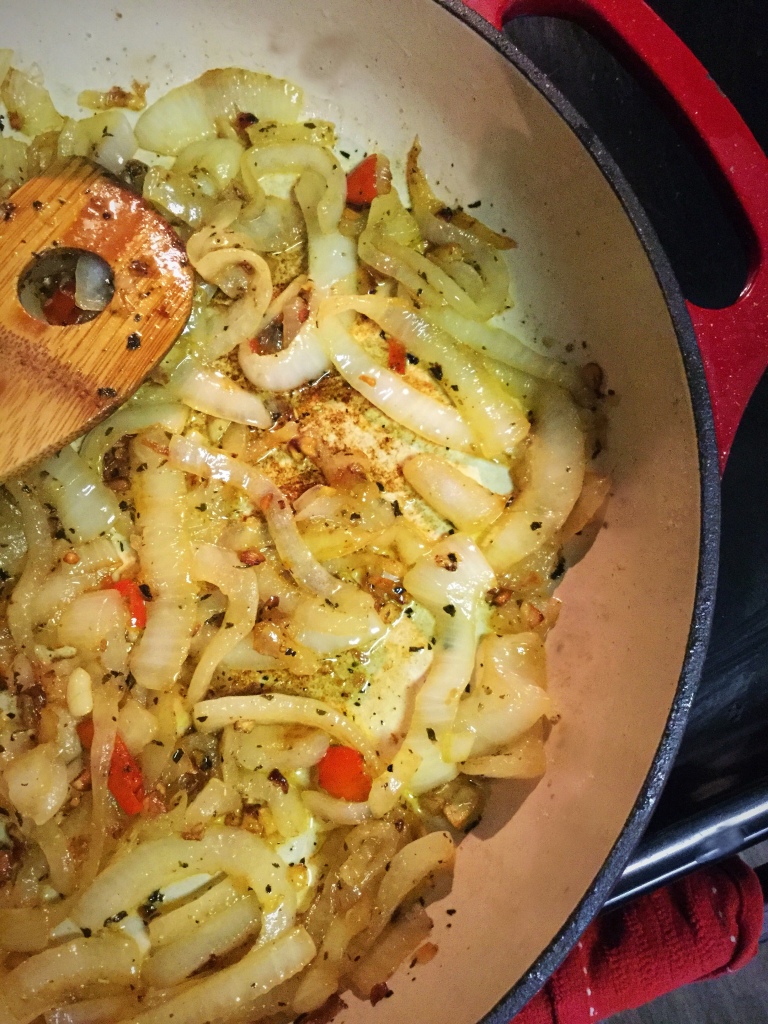 After the onions have cooked, I set them aside to cool. At this point, I blotted the zoodles with a paper towel, then wrapped them (one third at a time) in a clean dish towel. Over the sink, get your frustrations out by squeezing the heck out of them to get rid of the excess moisture. Some people do the same with the tomatoes but I have never had an issue with them.

Here I’ve just laid them out and mixed them with the tomatoes and the cheese. The onions were still cooling. Also, I used kitchen shears to cut the zoodles into more manageable lengths. Zucchini spirals can be two to three feet long; cut them to about the size of spaghetti or even a little longer. This pie works because the zoodles add a really unexpected texture. If you cut the noodles too short, you won’t get the full effect.

By the way, the short white strips you see below are cheese. I used Trader Joe’s blend of shaved Gruyere and Swiss. 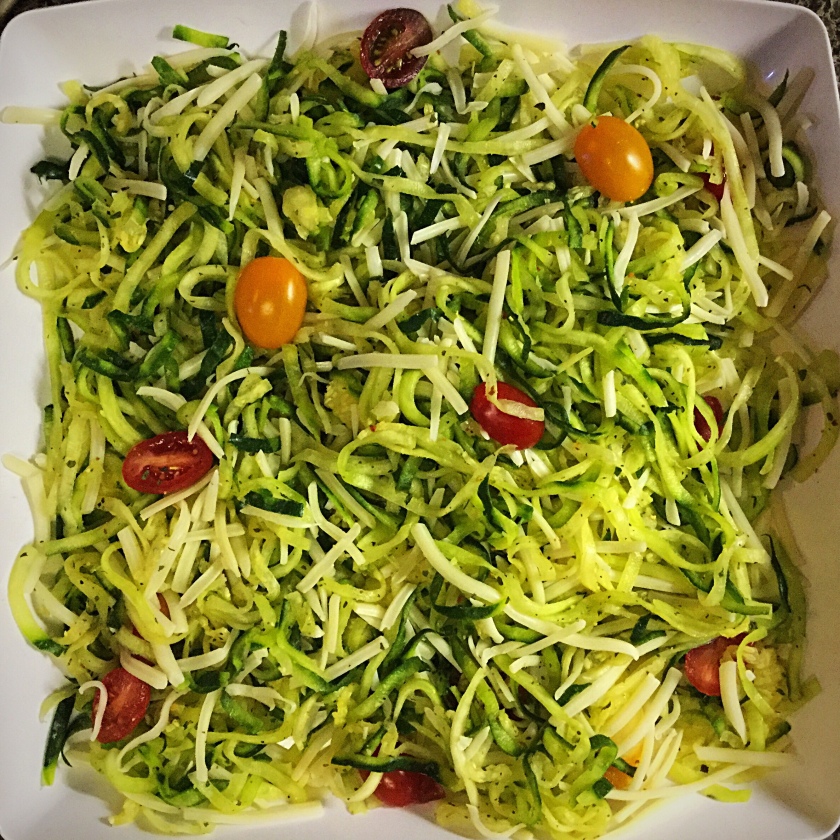 I was impatient so I added this mixture to my pan (pre-sprayed with pan release) before I mixed in the onions. It didn’t make a huge difference. In the photo below you can see all of the ingredients incorporated. I think it looks so pretty!

Next I poured in the egg mixture. (7 eggs and one half cup of full fat cream). After the eggs have gone in, I use a fork to make sure it’s fully incorporated. Also, gently wrap the pan on the counter top to bring up any bubbles. Once I’m satisfied that everything is fully incorporated, I grated some Asiago cheese over the top.

This goes into a 400 degree oven for 35 minutes or until a knife inserted comes out clean. As you will see in the photo, I stayed outside in the garden just a little bit longer than I should have. This is a little bit browner than I’d have liked, but it was still delicious!

We let this sit on the counter for a couple of hours while we played at the pool. I ate the first slice cold, topped with sour cream, chives and hot sauce. I could have eaten the entire pie.

This recipe would be great for brunch or a light summer supper. Pair it with fresh veggies or a summer salad! It’s also wonderful for a quick, healthy snack. Hubs and I are doing the keto lifestyle, so I often add half of an avocado as my side dish!

If you make this, please let me know what you thought!

I'm just a person. I've been a mystic sharing inspirational experiences and stories my entire life. This blog is a personal experiment in self reflection and expression with a few angel readings and recipes sprinkled in for good measure. (I've always got something cooking!) View all posts by Bobbe