All of my friends and family know I pay attention when the great spirits beyond start to invade my space! The other night I turned over in bed to see a Native American…. 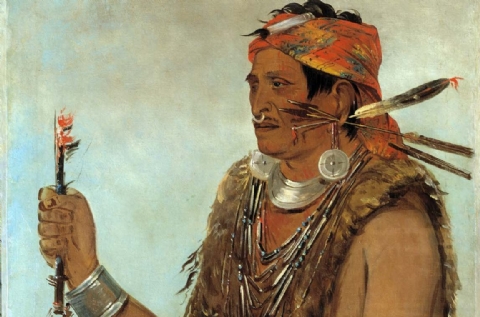 All of my friends and family know I pay attention when the great spirits beyond start to invade my space!  The other night I turned over in bed to see a Native American -in full regalia-standing in the doorway.  For a split second our eyes met and then he disappeared.  I closed my eyes, made a mental, “what was THAT” note and tried to fall back asleep.  Just a few minutes later I looked over my shoulder to the foot of the bed and felt his presence there again.  In my mind I said, “What is your name?”  Instantly I heard, “Tecumseh”and I made another mental note: “look up Tecumseh in the morning.”
During the next few moments I knew instinctively that he was praying for me. In his eyes, I saw great compassion and understanding. I was not afraid.

The next morning, still scratching my head, I decided to do a little research to see if I could find this person in history.  Of course, it was easy as “Tecumseh” is in fact, a prominent figure. He was the Native American Leader of the Shawnee.

When I looked through the pictures I found in my research,  I was startled to find that it wasn’t “Tecumseh” I saw, but rather, his brother, Tenskwatawa, who had stopped by for a visit.  I believe he used the name, “Tecumseh” because it was easy for me to remember (and to spell) and because apparently wherever Tecumseh is mentioned, his brother is also mentioned.

What I found about him is profound (to me).  Tenskwatawa, was apparently born a klutz, same as me.  LOL.  What I remembered about seeing him in my room was a distinctive marking over his eye.  The history books say that he was so bad at fighting, his brothers refused to teach him hunting techniques and that the mark on his face came from a wayward arrow that hit him in the eye.   He spent a good part of his life learning the ways of his tribe’s medicine man but he was not received within, as a prophet, until much later in life.

This takes me back to a Bible phrase, I am constantly referring to: ” A prophet is not without honor, but in his own home town.”

He spent a huge part of his life as an alcoholic.  Finally in later years, while smoking a pipe, he went into a trance.  His family thought he was dead and so began to prepare for burial when suddenly he awakened and began to relate his experience of visiting with “The Master of Life”.  He urged his people to return to their old ways and if they did, they would have, “an open door”.  The whites called him, “The Prophet”.  His name literally meant, “The Open Door”.

Apparently he lead a great deal of people for a long time but ended his life with only a few friends and family and apparently back in the bottle again.  Interestingly, the  places he lived and settled are places I frequently pass on the way to Chicago and so forth.

What does all this even mean in the large scale of things and why am I taking my time to write it all out for you?

I won’t relate every single detail of his message to me.  Suffice it to say he spoke to exactly what is going on in my life and he also foretold to me what could happen to me if I don’t get off my duff and start living my life back in the light.

I didn’t ask him to come to me.  I didn’t even know he existed prior to this visitation.  But I remembered him and took the time to find out who he is.

This is happening to all of us ALL the time.  Whether you believe this was an actual visitation or just a dream, it makes no difference, because the message I received was loud and clear.  You are ALSO receiving constant messages through your experiences and dreams.  It’s important to recognize these are messages to learn from.  Nothing happens at random in this Universe. All of heaven is standing at the ready to help each one of us, we need only ask, believe and receive.

The same is true for you.  I promise.

I'm just a person. I've been a mystic sharing inspirational experiences and stories my entire life. This blog is a personal experiment in self reflection and expression with a few recipes sprinkled in for good measure. (I've always got something cooking!) View all posts by Bobbe